How do you juggle four children and a thriving Alpine business?

How many of you have had the thought about ‘giving it all up’ and moving to the mountains? As you sit on a chairlift admiring the majestic snowy scenery, carve that perfect turn or even relax in the bar at the end of the day, how many of you have had the feeling that life would be so much better spent doing what you love and making a permanent move? Most of us return home after our winter break and get subsumed into ‘normal’ life; the desire to change life gets swallowed up in the busyness of family and work and is eventually forgotten. Someone for whom this did not happen is Emma Lambourne who lives in Morzine with her husband and four children. Emma, alongside her husband, runs Mountain Mavericks, a chalet business, in the French Alps. Below you can find out a bit about how she manages and what advice she has for others wishing to follow their dream.

Tell us a bit about your family? 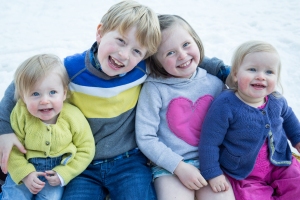 Luc, Lola and the twins

I’m married to Olly and have four children; the oldest is Luc aged eight; followed by Lola who is five; and the youngest are our twins Isla and Beatrice aged 20 months. I’m originally from Nottingham and my parents still live there. I met Olly at the Snowboard UK Board Test in Hintertux, Austria in 2001 where we were both working.

How did you end up making your home in the French Alps and how long have you lived here?

Olly’s sister, Lucinda, started Mountain Mavericks and bought Chalet Chambertin in 2003. She was keen that Olly and I come out and work with her, particularly as Olly had done several seasons in Morzine, but we resisted as we had good jobs. I was working for Protest and Olly was working for Burton. After two years of Lucinda pestering us, one day we were sat on the old Prodain chairlift going upto Avoriaz and we both turned to each other at the same time and said, “Let’s do it!” We wanted to manage the French-side of the business, and Lucinda manages the English-side of the business. After the first year in Morzine I became pregnant with Luc, and at the same time we started to expand the business with the addition of Chalet Le Prele. Since then the business continued to grow.

How did you get into the snowsport industry?

After university, travelling and six months working in Ho Chi Minh City, Vietnam I came back looking for a job and bumped into a couple, Suzanne and Gordon, whose children I used to babysit. They offered me a job in their company, Ultrasport, who distributed action sports gear. Originally I just answered the phone, but a vacancy arose so I ended up working the Flow account. Suzanne and Gordon took me on my first snowboarding holiday and I never looked back. Protest then offered me a job in Sevenoaks which meant I could be nearer London and all my friends, and I ended up working for Protest for five years. I was UK-based but got to travel occasionally, and helped in the design department putting collections together and going to trade shows. It was during my time here that Lucinda persuaded Olly and I to make our permanent move to the Alps.

What is the best thing about living in the Alps?

The scenery is stunning and not a day goes by when I don’t think, “It’s gorgeous.” Every season is special, and as we have four very distinct seasons the seasonal changes are very noticeable. We have a chance to work together owning our own business and, of course, the children are bilingual which is fantastic.

What aspects of living in the Alps and having a large family is challenging?

Being away from family and their support is undoubtedly the biggest challenge. I miss them, and in low moments I have considered going back, but it has got easier as time has gone on. Olly and I are good at spotting each other’s needs and allowing each to have time back in the UK seeing family and friends. Having that time away gives me and Olly a better perspective, allowing us to come back stronger and in a better frame of mind.

How do you combine motherhood and working in the snowsport industry?

Olly and I share the childcare equally, which this business allows us to do. We have a very good nursery, and obviously the older two are at school. During the winter we have a babysitter three days a week who also helps with the laundry. I am extremely organised and think ahead planning and preparing for the next day. At work we have a board which details my whereabouts, and I am strict with my time and telling people when they can and cannot contact me. People know that after 6pm is family time.

How many days snowboarding do you get a season?

Not as many as I would like! This last season I got out six times (Kate – I feel privileged that one of those was with me – read Mums in Morzine post), but I plan to get out more next season as we will have more staff in the office allowing me a bit more flexibility. Mostly I don’t get frustrated but if it’s a Bluebird Powder Day I am grumpy – who wouldn’t be?!

What is your snowboard set-up?

I ride goofy on a Gnu Ladies Choice 151 with Burton Escapade bindings. I do have a new Rome Powder Room splitboard too, but I’ve not managed to get out on it yet.

Any advice for women wishing to combine working in the snowsport industry and having a family?

If you are passionate about snowsports just do it! The key is to be super organised. Seeing the kids skiing and snowboarding at three years old is amazing, and something they would not be able to do living in the UK.

A huge thank you to Emma for giving up her time and sharing her story and insight into combining snowsports and family life. As with many things there are good and bad, but it certainly sounds like the positive outweighs the negative. Organisation and self-discipline sound like key attributes, alongside a supportive partner. So for those of you who are serious about living in the mountains and having a family to manage you now know what you need to do. For some extra reading checkout this article by Entrepreneur for 10 Quick Tips to balance work and motherhood.

Here’s to the next season and may you, and Emma, get out on your boards and skis as often as you wish.