Help: none of my family or friends want to snowboard!

What are you options if no one you know wants to come away with you? Maybe you are a seasoned snowboarder or a newbie, but either way this season you are ‘billy no mates.’ I have been in this position and I did not really fancy packing my snowboard and heading to the mountains to spend a few days on my own. What is the point of snowboarding if not to have some fun? As part of a crew the laughter is far harder, noisier and louder than on your own. So what can you do if you do not want to shred all alone?

There are several options: 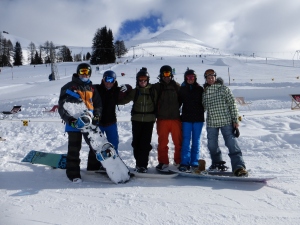 For those who prefer to learn in a single-sex environment there are female-only camps such as Our Camp based in Morzine, with a freestyle focus, run by British pro snowboarders Gilly Seagrave, Emma Rogers and Sonia Shaw. Plus GirlieCamps which offer various snowboarding activities in Avoriaz and Les Deux Alps in France, Laax, Switzerland and Åre, Sweden. For those wishing to venture further afield Nonstop Snowboard based in Canada have a number of snowboarding options and they won the recently announced World Snow Awards for Best UK Specialist Tour Operator.

You should probably ask yourself what do you want to get out of the holiday; is it having company in the evenings, spending time with friends and family, learning or elevating your snowboarding skills, hanging with other like-minded women or something else? Whatever you do, don’t procrastinate, get it booked and get away on the snow – trust me, you won’t regret it!