Snowboarding and skiing is all about being in the fresh air amongst beautiful scenery, learning a new skill, gaining confidence and feeling excited and thrilled, so what can be done in the summer to replicate this for the kids? In the Northern hemisphere there is little accessible snow but other pursuits and activities can be found to fulfil similar criteria.

We have just come back from a week camping in North Cornwall courtesy of Treyarnon Youth Hostel Association. Hmmm, being under canvas in the UK with its unpredictable weather isn’t much fun right? It may not be my ideal holiday and we did have our share of rain, wind and mist but the kids loved it. We travelled with two other families and between us there were six children ranging in age from six to fourteen. We rode the waves, rambled through the rock pools, consumed cream teas, polished off pasties, wandered around the Eden Project, perused the shops in Padstow, played cricket and surveyed sunsets. 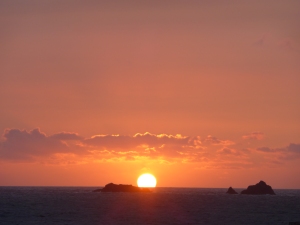 The kids all worked well together with very few arguments and disagreements. Occasionally the group of children had an air of ‘Lord of the Flies’ about it and adults had to intervene to stop a child being left out or picked upon. But mostly they were well behaved even if they did become rather feral by the end of the week. One of the best parts of the holiday was allowing the children more independence than they would get at home. Nowadays kids’ lives are highly structured; gone are the days when I used to set off on my bike to climb trees and play in the park until I got hungry or it turned dark. But in safe, rural Cornwall they could roam more freely with the older ones looking out

for the younger ones. We would come out of the youth hostel to find the kids had set up chairs out on the field chatting and telling each other stories; no heads bent over electronic devices ignoring the person next to them. It certainly helped that there was no phone reception and the wifi was so slow the kids were not interested. One of their favourite pastimes apart from bodyboarding and surfing was throwing rocks into the pools (six-year-old Iris loved this) to see how wet they could make each other, and covering their hair in dye. Harry said the best part of the holiday was, “Jumping into the giant rock pool.”

Every day they were in the sea, and yes wetsuits were needed, feeling excited and thrilled by the power of the waves. My daughter, Freya, did not surf as much as we expected but she still revelled at being in the water and all gained confidence. The North Cornish coast may not be as magnificent as the Alps but it is ruggedly beautiful and has its own charm. Everyone certainly got lots of fresh air, and despite the English summer weather we all came home with sun-kissed skin and a feeling of contentment that a good holiday should engender. For those of you who do not believe winter and summer sports can mix checkout the video below of the crossover sport of wave skiing depicted by Chuck Patterson as he blasts down Maui’s mountainous North Shore waves.

Hope you are all enjoying the summer holidays. 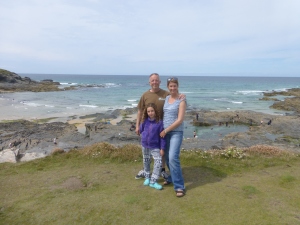 1 thought on “What do children who like wintersports do in the summer?”