You watched the Sochi Olympics last year and saw Jenny Jones’s bronze medal slopestyle run. You have seen the cover photos on magazines such as The Reason, Whitelines and Cooler Magazine. Freestyle is for Olympians and men with proverbial ‘balls of steel’ who huck themselves over huge kickers or slide down insane rails. It is not to be attempted by mere mortals who value their bones and dignity. Checkout the clip below of Yuki Kadono who become the first person to ever stomp back to back 1620s in a slopestyle contest which earned him first place at the Burton US Open Snowboarding Championships held in Vail, Colorado earlier on this month.

When I started snowboarding freestyle was not something which was on my horizon. It was so far beyond my capabilities that I never even considered it an option for the future. I admired the riders; their skills, nerve and psychological strength but always thought it would be an armchair pursuit rather than a participatory one. That was until I rocked up at Snozone in Castleford. I had expected an evening of shredding with a group of women working on freeride technique but instead found myself riding a kicker and a small box rail. I surprised myself how much I enjoyed it and although it did not compare to what I had seen the pros do I realised it was possible. 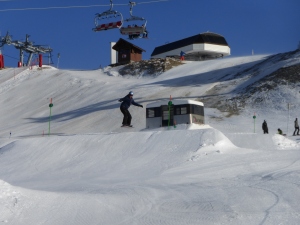 Claire getting some air in the Chapelle Park, Avoriaz

Who can help? If this is something you would like to try but have always thought it would be too hard, too scary or too dangerous it is time to think again. If I can do it so can you! Personally I find the resort parks can be a bit intimidating so often have a private freestyle snowboard lesson as it helps with my confidence. An instructor will also encourage you to progress. In January this year the conditions were icy and windy – see my previous post, ‘Holiday Highlights’. We were almost the sole occupants of the park in Avoriaz where the landings were compacted ice. If we had not been with an instructor it was likely we would have passed up the opportunity and wimped out. Getting proper instruction is vital if you want to start freestyle or improve your technique or stomp bigger features. Below is a clip of Claire and I several years ago showing that you do not have to go big to have fun.

Where can I go? There is lots of support for people wanting to try freestyle with two hour sessions at the indoor snowslopes through to week-long courses out in the mountains. You can start small and build on your achievements. Definition run one or two days courses in the UK indoor snowslopes. Other companies who operate at the indoor snowslopes include Snowboard Coach and Maverix. If you want to travel abroad MINT Snowboarding do a freestyle week in France and further afield NonStop Ski & Snowboard offer week-long courses in Canada. There is also the option of summer snowboarding in the higher resorts which offer freestyle, so if you fancy getting a summertime snow fix this one is for you. Checkout Onyx’s camp in Les Des Alpes. 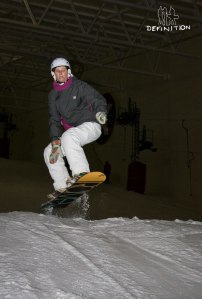 How can I minimise injuries? Freestyle does require greater core strength than cruising the pistes, so fitness is important. Work on getting stronger before you head out to the mountains or into a ‘fridge’. I covered fitness back in November 2014. Wearing protective clothing and equipment such as impact shorts, helmet and a back protector will help when you fall. And if you really do not fancy getting airborne or sliding on a hard metal object then flatland tricks are great fun. Below is a clip showing you how to perfect a ‘butter’. These can be performed on the piste and no park required.

You may never be a medal winning Olympian but that does not stop you feeling euphoric when you stomp your own landing and conquer those freestyle fears. Yes it is a little scary, a bit more physically demanding and you do fall slightly harder, but if you don’t try it you’ll never know how much fun can be had and what you are missing out on.

2 thoughts on “Freestyle isn’t for me right?” 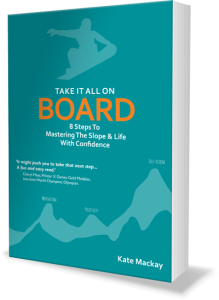