They said there would be no snow, and up to a few days ago it was looking a bit sketchy in parts of Europe, but our girls’ trip was booked and we were going. Claire, a fellow shredder, plus Tina, a skier and I have seven children between us, so it was a chance for some female bonding and time off from domestic duties and work.

Last week we headed to Morzine, in the Portes du Soleil area of the French Alps to stay with Mountain Mavericks in Chalet Atelier where we were most ably looked after by hosts Ben and Steff. The lack of snow in Morzine was startling: more like April than mid-January, but we knew there was snow to be had higher up in Avoriaz, so what did we get up to and what were the highlights of our trip?

A bit breezy in the park!

Spending time on the snow: this is what we had come for and we wanted to get as much shred time as we could. The conditions were not great as the snow was hard-packed, icy in places and almost non-existent in others with bare patches of grass. However, it did snow a bit whilst we were there which alleviated the worst conditions. We managed to get up to Switzerland, into the park and I rode my favourite run.

Tammy and her crew

Taking lessons: Claire and I had booked lessons with Tammy Esten from Mint Snowboarding and we had a blast. Tammy has taught me before and I always learn something new, make progress tackling a bad habit and get pushed out of my comfort zone. All of this makes for progress in becoming a better snowboarder. We were joined by another student, also called Claire, and we all bonded well together. We worked on technical aspects of riding, including switch and practised flatland tricks (tail presses aka wheelies are one of my favourites) and took to the park a couple of times despite the challenging wind. I finally understood how looking up, rather than down at the snow, helps with the flow and feel of snowboarding – thanks Tammy.

as a working mother I have a real desire to switch off from everyday life (just for a little while) and pamper myself with a bit of luxury. I have stayed with Mountain Mavericks before as they have a number of chalets and a hotel in Morzine. Atelier is a well located chalet close to the new Prodain cable car. The food included hot breakfast, freshly cooked cake for the afternoon and a three course evening meal plus cheese board (my scales groaned when I got home). There was also a hot tub which is a real antidote for the aching muscles at the end of the day. The hosts were extremely welcoming and I even got some advice – if your snowboard pants rip (mine did) use tent tape from a camping shop to make repairs. It is cheaper than specialist repair kits from snowboard shops and is more discreet than duct tape. Thanks for the gift of the tape Steff. It was a real treat to stay in a luxurious chalet and one I look forward to every year. 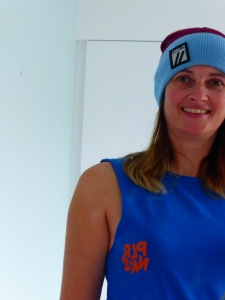 Thanks for the kit guys

I had the chance to chat, laugh and swap stories with Claire and Tina (we usually have snatched, short-lived conversations in the school yard), but I also met up with old friends and made new ones. Most of us want to share times with our family and friends and we do not always see as much of the people we would like to. I saw my school-friend Katrina and her family who now live in Switzerland and Suzanne who now resides in France with her partner and three children. It was heart-warming to hear how everyone was and catch up with all their news. We shared the chalet with a group of pro-skiers who were on a photo shoot for Planks Clothing. They were good fun and had interesting and entertaining stories to tell. Judging by the beautiful photos they skied hard, and I had personal experience that they partied even harder!

Though the snow was not as good as we would have expected in January and I did not get to do any off-piste we still had a relaxing, fun-filled time doing what we loved to do with good company. A huge shout out to Mint Snowboarding, Mountain Mavericks and Planks Clothing for making a great week even better. And here’s a clip of Claire proving that there is fun to be had even when the snow is not as abundant as you would wish.

Now where is my 2016 diary to schedule the next girls’ trip?